Skyward: The Story of Female Pilots in WWII is Sally Deng’s debut book, which published earlier this year. What started as a scroll through Pinterest developed into this beautifully-illustrated passion project about three young women who wanted to reach great heights—Hazel is an Asian American living in San Francisco, Marlene is a young woman living in the English countryside, and Lilya is from a small town in Russia. Here Sally tells us all about the fascinating stories she learned while working on this book and answers questions about her creative process, how she conducted her research, and her chocolate-filled studio space. 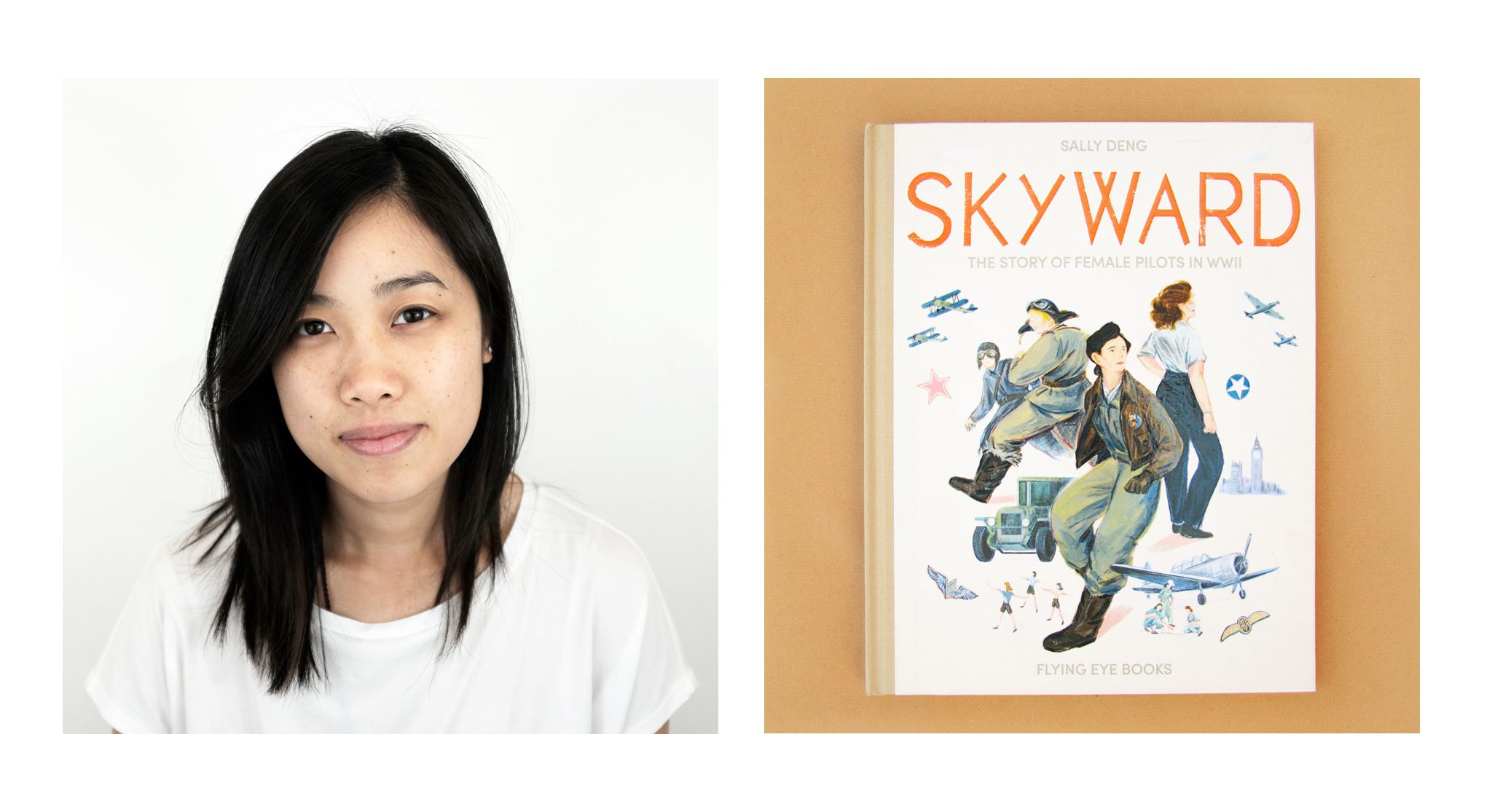 Nobrow: How did Skyward start? Did you already have a fascination with female pilots in WWII?

Sally: “I was looking through Pinterest in college and found a vintage photo of Hazel Ying Lee—the first Asian American female pilot in the United States. I didn’t think it could be real—how could a woman, especially a Chinese American woman, be allowed near a plane during that time? I spiraled into an internet research hole and came out with a whole series of paintings and drawings inspired by these pilots.”

Nobrow: What kind of research did you do while creating Skyward? Did you get to meet any WWII vets?

Sally: “I checked out quite a few books from my university’s library, and had to dig into out of print books about female pilots from other countries. One of my professor’s mothers was a WASP pilot, and he had hours and hours of recordings of her talking about her experience. One of her stories made the book: she was in her plane, and the oil started to leak. She needed a quick fix, so she took off her shirt to clean the oil off the plane.”

(Note: this is referenced in Skyward on page 54, when Hazel has to make an emergency landing and wipe down the windshield with her blouse.) 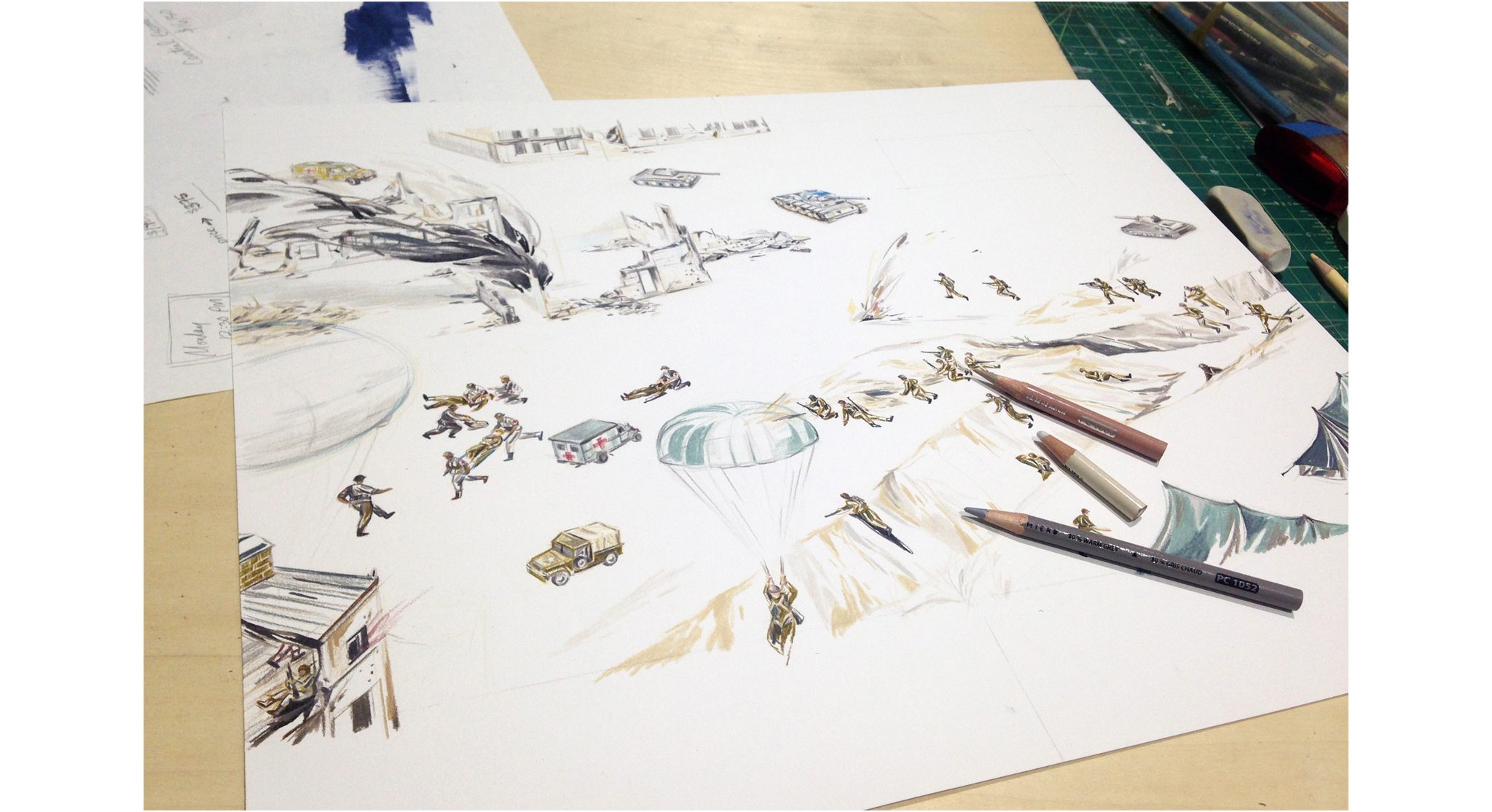 Nobrow: Are the stories of the three girls based on anyone in particular? If so, who?

Sally: “Yes. The Asian American pilot is based on Hazel Ying Lee, and Lilya, the girl from Russia, loves to draw, which is also what I love to do. Each one is sort of representative of me in some way.”

Nobrow: What’s a favorite story that didn’t make the book?

Sally: “There was a young girl in America who wanted to be a WASP pilot. She had scheduled her physical, but knew she didn’t meet the minimum weight requirement, so hours before her physical, her mother took her to a nearby diner and she ate until she couldn’t eat anymore. She barely passed the physical, but she did eventually become a pilot.” 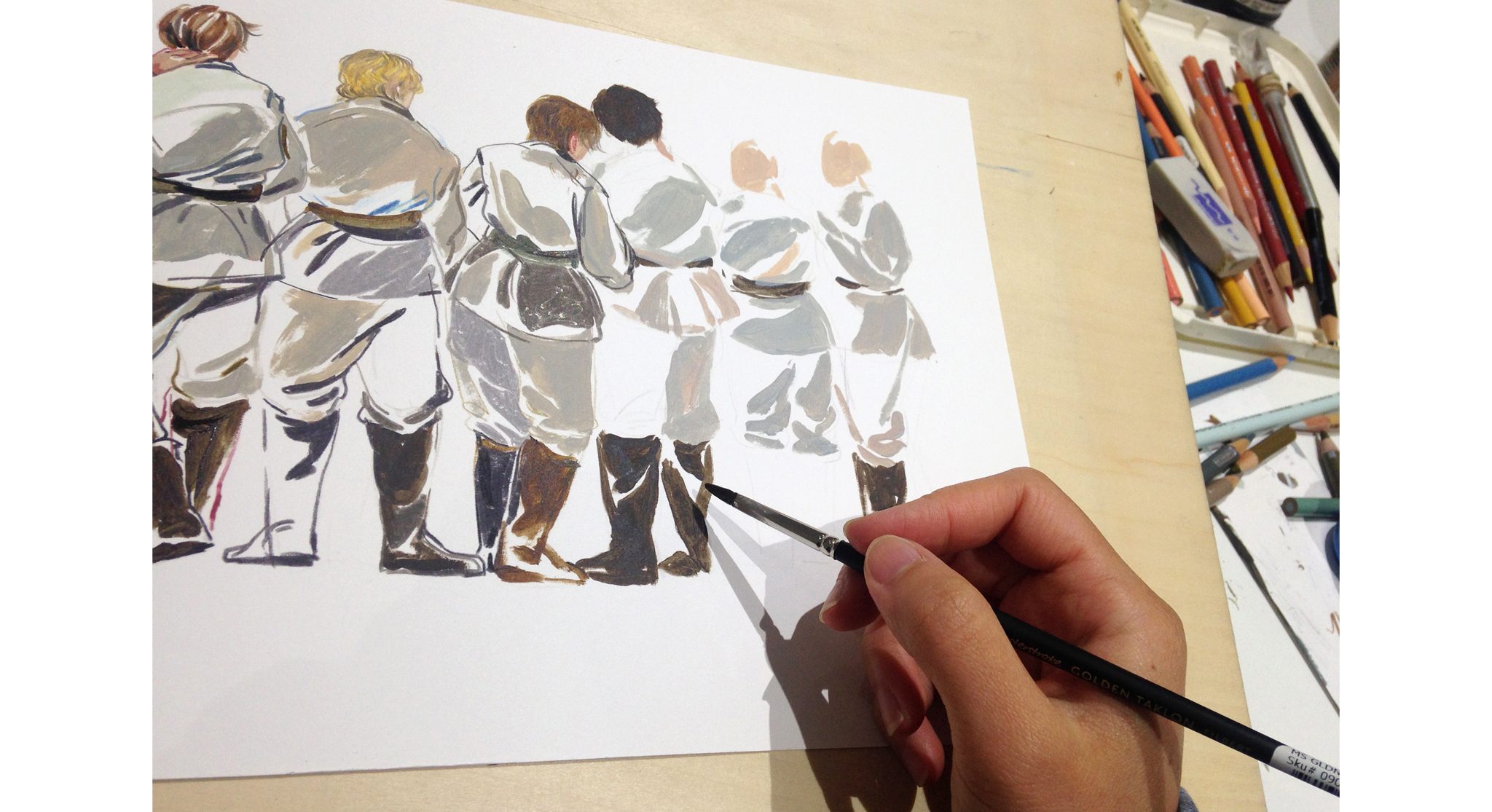 Nobrow: Which character in Skyward was the most difficult to create?

Sally: “The character that was the most difficult to draw was Marlene. The English women pilots that I saw photos of always looked so beautiful, like models, with their amazing hair and makeup. That’s totally not me, but I just tried really hard to make Marlene look cool.” 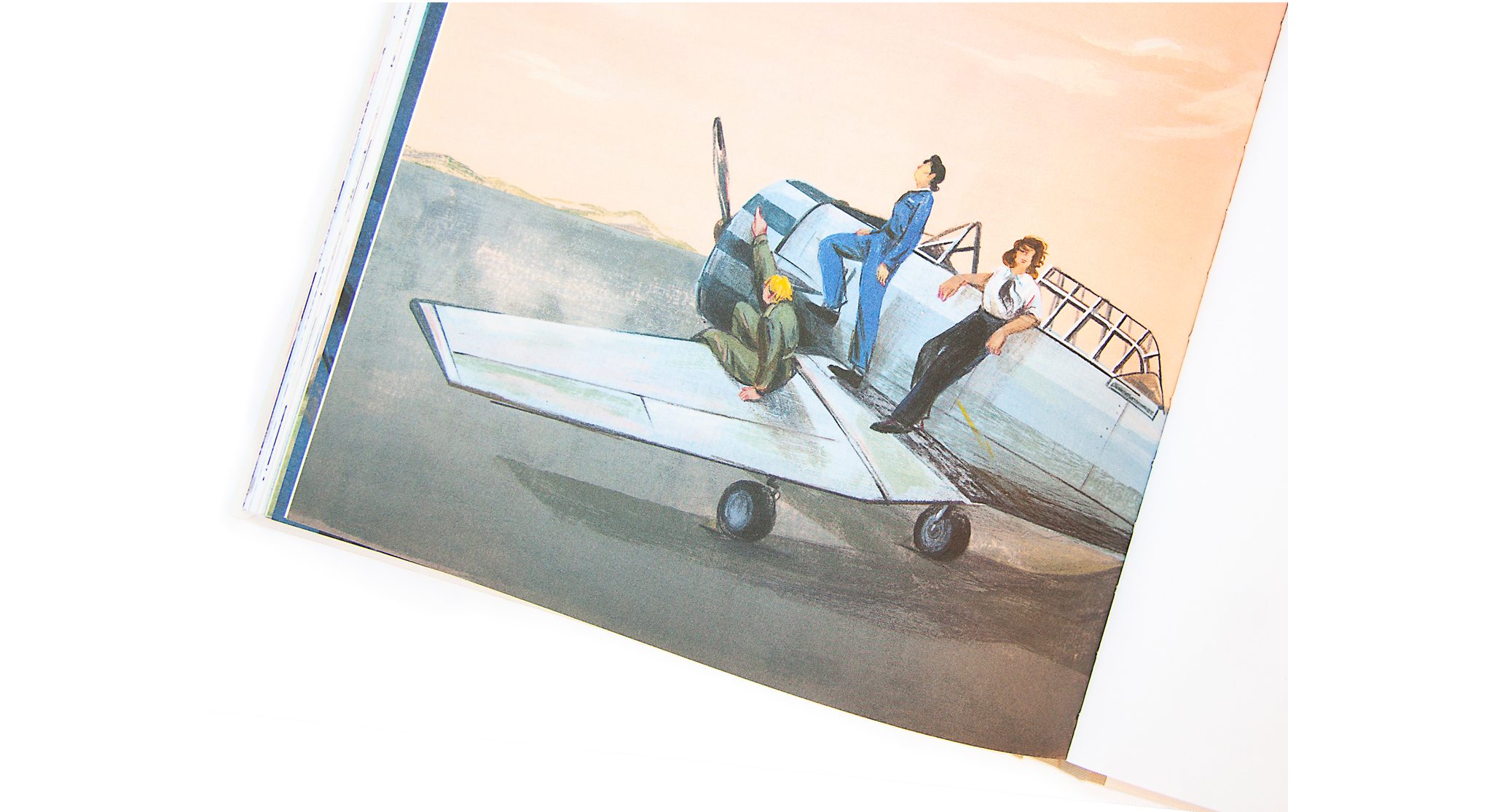 Nobrow: In your research, what little-known facts about the female pilots of WWII did you find?

Sally: “I learned a lot of things. First, doctors in WWII didn’t know much about the female body—all the requirements for passing the physicals were in accordance with male bodies. Also, a lot of flying was learned on the go. The pilots didn’t have time or proper training to learn how to fly each air craft. The UK pilots (the ATA) had manuals they would tuck in their boots, basically ‘Flying This-Type-of-Plane 101.’

In America, many of the women who were pilots came from wealthy families who could fund their pilot lessons, but for those who weren’t, they had to go back to civilian life with little hope of having the money to continue flying on their own. In a lot of their interviews, the women pilots didn’t want it to end. They wanted to keep flying.” 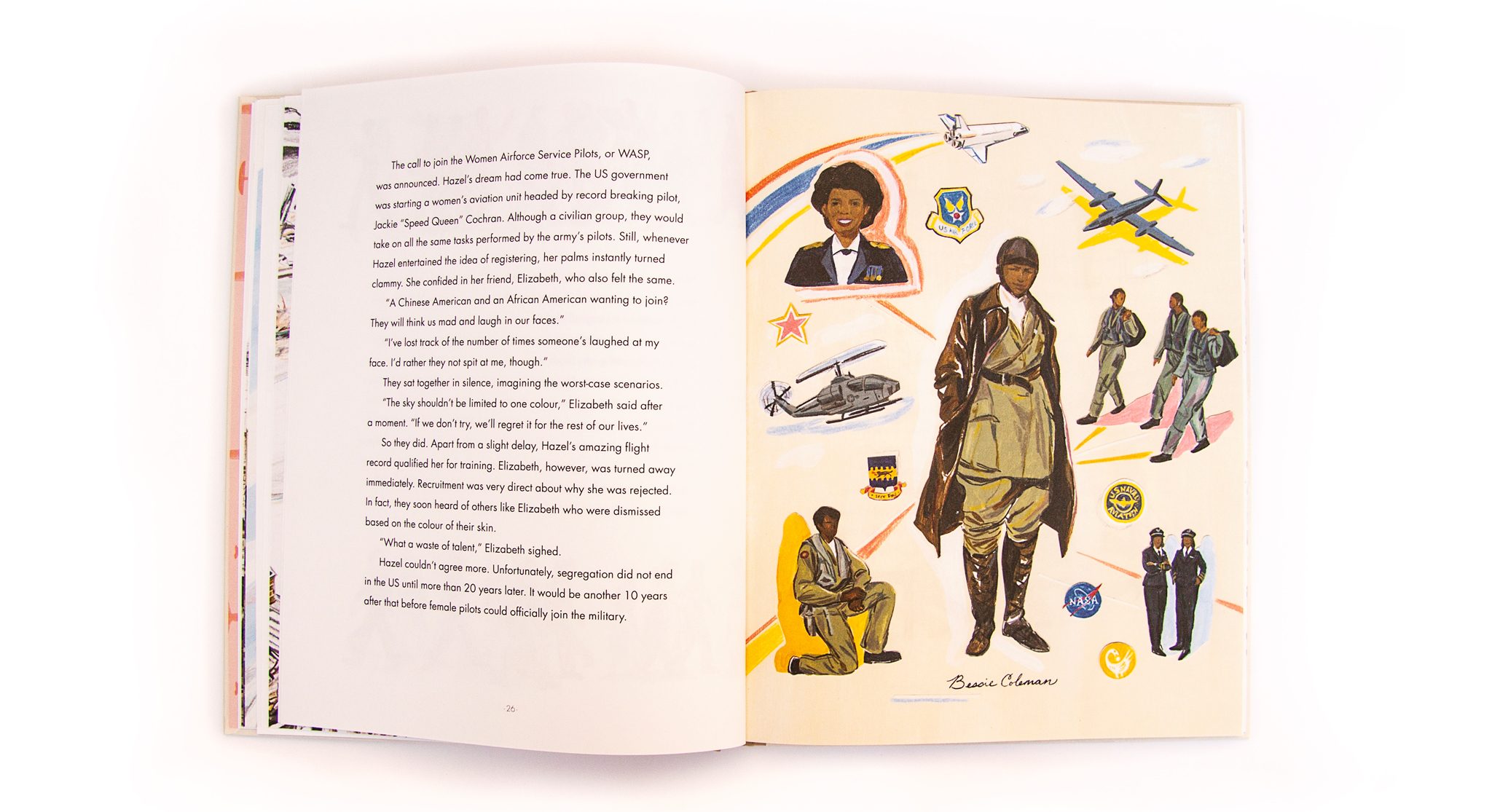 Nobrow: What’s your ideal drawing space and what kind of snacks/beverages does it include?

Sally: “I just moved to a bigger shared studio space, but it doesn’t have windows like my last space. So windows and plants make the space ideal, and I always have chocolate around—it’s probably a vice.”

Nobrow: When did you start drawing? What’s pushed you to keep going?

Sally: “Ever since I could remember. My parents told me I started holding a pencil at 3. My parents really supported me from a young age with drawing. When I was a bit older, I couldn’t sit still, and I kept bothering them, so they sent me to art lessons. When I was trying to choose between colleges, my dad saw that I was hesitating between a studio art school and a regular liberal arts college. He encouraged me to go to the art school. I’m really lucky in that way.” 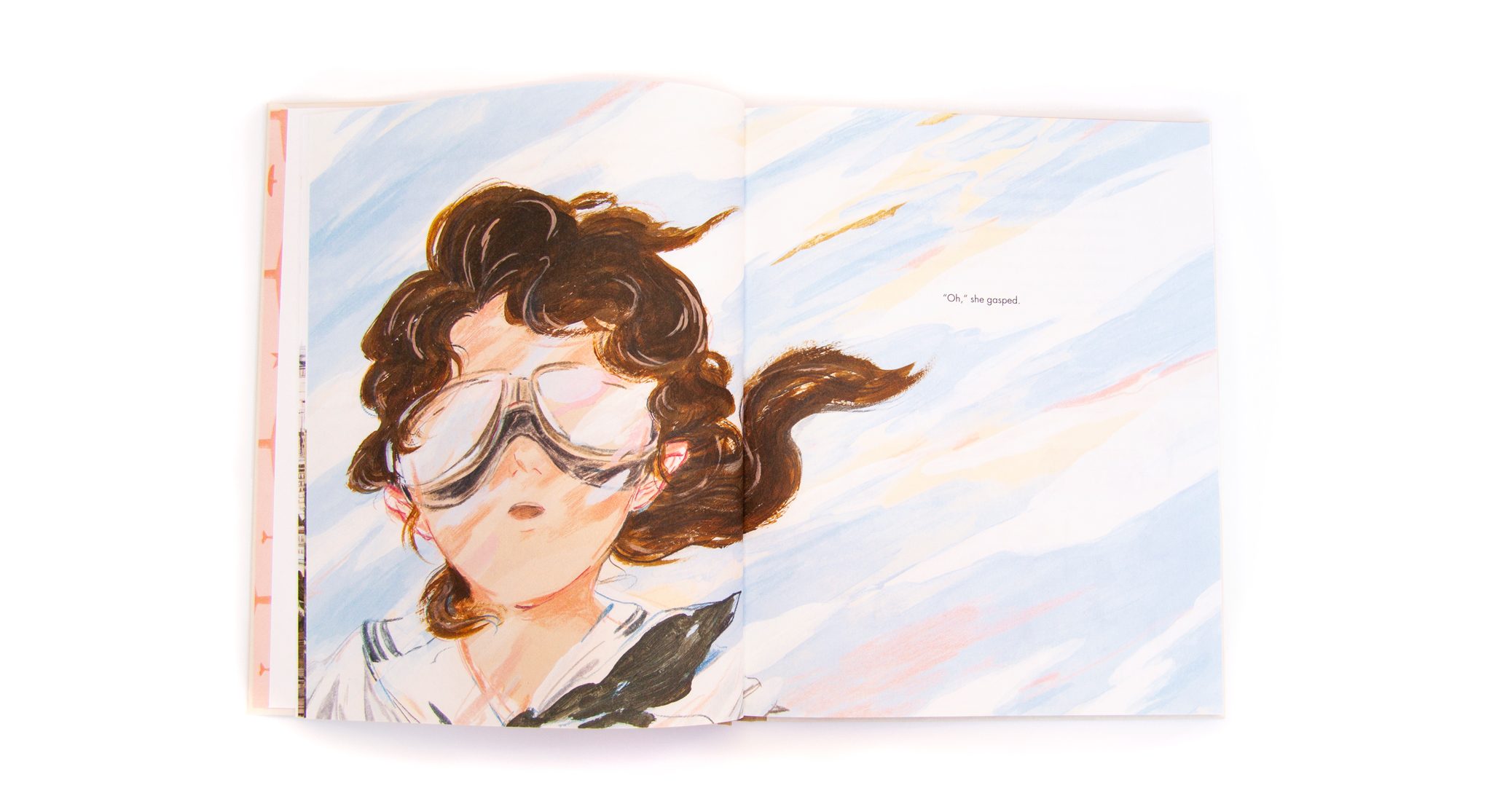 Skyward: The Story of Female Pilots in WWII is out now. Find a copy at www.penguinrandomhouse.com or www.flyingeyebooks.com